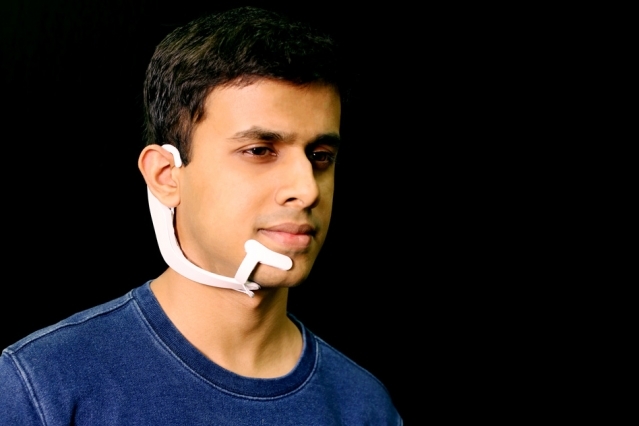 There is no wonder or anyone these days that technology is developing even faster than any of us could have ever imagined some years ago, but to have in 2018 a piece of technology that is reading your mind it may go even beyond our wildest imagination.

And yet, MIT is proving it possible. MIT researchers have developed a computer interface that can transcribe words that the user verbalizes internally but does not actually speak aloud.

The system consists of a wearable device and an associated computing system. Electrodes in the device pick up neuromuscular signals in the jaw and face that are triggered by internal verbalizations — saying words “in your head” — but are undetectable to the human eye. The signals are fed to a machine-learning system that has been trained to correlate particular signals with particular words.

According to MIT news’ website, the device also includes a pair of bone-conduction headphones, which transmit vibrations through the bones of the face to the inner ear. Because they don’t obstruct the ear canal, the headphones enable the system to convey information to the user without interrupting conversation or otherwise interfering with the user’s auditory experience. Moreover, the device is part of a complete silent-computing system that lets the user undetectably pose and receive answers to difficult computational problems. In one of the researchers’ experiments, for instance, subjects used the system to silently report opponents’ moves in a chess game and just as silently receive computer-recommended responses.

Thad Starner, a professor at Georgia Tech’s College of Computing, quoted by ZDNet, believes the technology also has potential as an industrial communications tool to assist workers in noisy environment such as airports or military. “You’ve got jet noise all around you, you’re wearing these big ear-protection things — wouldn’t it be great to communicate with voice in an environment where you normally wouldn’t be able to? You can imagine all these situations where you have a high-noise environment, like the flight deck of an aircraft carrier, or even places with a lot of machinery, like a power plant or a printing press,” declared Starner, for ZDNet.

Oh his turn, Arnav Kapur, a graduate student at the MIT Media Lab,said in a statement that their idea was “Could we have a computing platform that’s more internal, that melds human and machine in some ways and that feels like an internal extension of our own cognition?” The researchers tested the device with different tasks, including games of chess and basic multiplication and addition problems, using limited vocabularies of 20 words. While the device is quite clever, it’s still limited; the researchers say it has a 92 percent accuracy with only 20 words. They’re hopeful that it will scale up with time. “We’re in the middle of collecting data, and the results look nice,” Kapur added.