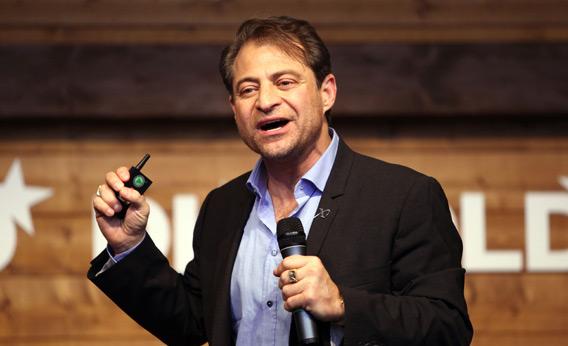 Peter Diamandis and the future of asteroids

Dr. Peter H. Diamandis is an international pioneer in the fields of innovation, incentive competitions and commercial space. In 2014 he was named one of “The World’s 50 Greatest Leaders” – by Fortune Magazine. In the field of Innovation, Diamandis is Founder and Executive Chairman of the XPRIZE Foundation, best known for its $10 million Ansari XPRIZE for private spaceflight. Moreover, he is the Co-Founder and Vice-Chairman of Human Longevity Inc. (HLI), a genomics and cell therapy-based diagnostic and therapeutic company focused on extending the healthy human lifespan. He is also the Co-Founder and Executive Chairman of Singularity University, a graduate-level Silicon Valley institution that studies exponentially growing technologies, their ability to transform industries and solve humanity’s grand challenges.

In the field of commercial space, Diamandis is Co-Founder/Co-Chairman of Planetary Resources, a company designing spacecraft to enable the detection and prospecting of asteroid for precious materials. He is also the Co-Founder of Space Adventures and Zero-Gravity Corporation.

Diamandis is the New York Times Bestselling author of Abundance – The Future Is Better Than You Think and BOLD – How to go Big, Create Wealth & Impact the World. He earned an undergraduate degree in Molecular Genetics and a graduate degree in Aerospace Engineering from MIT, and received his M.D. from Harvard Medical School. Diamandis’ mission is to open the space frontier for humanity. His personal motto is: “The best way to predict the future is to create it yourself.”

In 2016, the Greek Government honored him by issuing a 1.2 Euro stamp into circulation. Also in 2016, the book How To Make A Spaceship  – A Band of Renegades, an Epic Race, and the Birth of Private Spaceflight, Peter’s biography and the story of the XPRIZE was written by Julian Guthrie with a Foreword by Richard Branson and an Afterword by Prof. Stephen Hawking.

His latest business, Planetary Resources plans to mine asteroids and has drawn funding, according to The Independent UK, from Google’s Larry Page and Eric Schmidt, real estate mogul Ross Perot Jr, the film director James Cameron and Richard Branson. “These near-Earth asteroids, many of which are much easier to get to than the Moon’s surface, are rich in rocket fuel, construction materials and strategic metals such as platinum. They’re the low hanging fruit of the solar system,” said Diamandis.

His ambitions plan to identify, explore, tag, and eventually mine some of the thousands of asteroids within 5 million to 10 million miles away and which contain valuable resources. “Much of human exploration has been driven by humanity’s search for resources,” Diamandis told PM. “The value proposition of going after resources has fueled humanity and allowed it to make the large investments required to open frontiers.”

“Water is one of the top materials that extraterrestrial resource-hunters will target. It would be valuable to future space missions as both life support and and drinking water for astronauts, and as the material for rocket fuel, which can be made from water’s constituent elements of hydrogen and oxygen. They also hope to obtain platinum-group metals, which are abundant in asteroids. Diamandis estimates that a single 500-meter-wide asteroid could contain as much platinum and other rare (on Earth) metals than have been mined in all of history,” writes http://www.popularmechanics.com.