The technology is advancing nowadays even faster than the speed of light. Its advances and upgrades can seem overwhelming, thankfully though we have the specialists to help us understand where we are heading and how to handle it. The Deloitte’s 2017 report outlines how companies presently must sift through the promotional noise and hyperbole surrounding emerging technologies to find those solutions offering real potential. To realize that potential, they should become ‘kinetic’ organizations—companies with the dexterity and vision required to thrive amid ongoing technology-fueled disruption.

While the report identifies key trends that will likely revolutionize enterprise technology in the next 18-24 months, the exponentials chapter looks even farther into the future, describing four key areas that blend science and applied technologies.

The 2017 trends identified by Deloitte, digitaltrends.com, Forbes and Gartner are as follows:

IT unbounded—The boundaries surrounding IT are fading as technology becomes integral to almost every business function and relationship.

A multitude of wireless technologies now exist to serve your smart home needs — Zigbee, Z-Wave, Bluetooth, Wi-Fi, and more. And there’s more smart home platforms to consider than ever before too — Wink, SmartThings, Iris by Lowe’s, even systems from security providers like ADT and big brands like Comcast. While centralization in theory should make things easier, it’s made it worse.

The AI world will have a head-on collision with the Internet of Things in 2017, too, Gartner predicts. IoT is where everyday items get chips or sensors, and apps, and join the internet — from your car to your toothbrush. It makes total sense that the apps that control IoT devices will also make use of machine learning.

In 2017, watch for devices to start to communicate and help each other make decisions. “As intelligent things, such as drones, autonomous vehicles and smart appliances, permeate the environment, Gartner anticipates a shift from stand-alone intelligent things to a collaborative intelligent things model,” Gartner says.  Gartner estimates that six billion connected “things” will be actively requesting support from AI platforms by 2018. 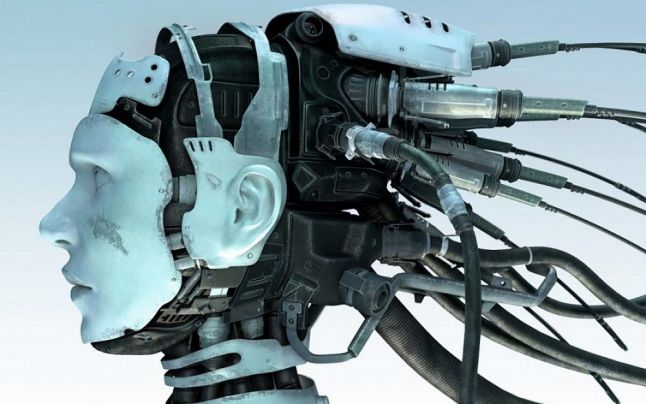 AI and  chatbots that understand context a whole lot better than ever before. More and more jobs will also be automated, we’ll also see smart devices gain from increased automation, learning your patterns and preferences without you needing to tell them and making better and more accurate suggestions and recommendations.

According to Gartner, virtual reality (VR) and augmented reality (AR) transform the way individuals interact with each other and with software systems creating an immersive environment.  For example, VR can be used for training scenarios and remote experiences. AR, which enables a blending of the real and virtual worlds, means businesses can overlay graphics onto real-world objects, such as hidden wires on the image of a wall.  Immersive experiences with AR and VR are reaching tipping points in terms of price and capability but will not replace other interface models.  Over time AR and VR expand beyond visual immersion to include all human senses.  Enterprises should look for targeted applications of VR and AR through 2020.

As forbes.com points out we’ve already seen some major steps forward for augmented reality (AR) and virtual reality (VR) technology in 2016.  Oculus Rift was released, to positive reception, and thousands of VR apps and games followed. We also saw Pokémon Go, an AR game,  explode with over 100 million downloads. The market is ready for AR and VR, and we’ve already got some early-stage devices and tech for these applications, but 2017 it’s going to be the year we see things really take off. Once they do, you’ll need to be ready for AR and VR versions of practically everything—and ample marketing opportunities to follow.

“Look for navigation services to get even more specific — maps in a store’s app, for example, to direct you to a specific aisle to find exactly what you’re looking for. So called “augmented reality,” where virtual objects and information are displayed on top of the physical world, will make its way to our phones. Search engines are already expanding on image search, allowing you to point your camera at something and search for information based on what the lens takes in,” said Ed Oswald for digitaltrends.com.

IDC predicts that worldwide revenues for the augmented reality and virtual reality (AR/VR) market will grow from $5.2 billion in 2016 to more than $162 billion in 2020.

Advances in computer vision and pattern recognition allow companies to unlock insights from unstructured data that until now, have been lost in the dark.

“Throughout 2017, I expect to see machine learning updates emerge across the board, entering almost any type of consumer application you can think of, from offering better recommended products based on prior purchase history to gradually improving the user experience of an analytics app. It won’t be long before machine learning becomes a kind of “new normal,” with people expecting this type of artificial intelligence as a component of every form of technology,” predicts Jayson DeMers for Forbes.

Mobile devices have been slowly adding technology into our daily lives. It’s rare to see anyone without a smartphone at any given time, giving us access to practically infinite information in the real-world. We already have things like site-to-store purchasing, enabling online customers to buy and pick up products in a physical retail location, but the next level will be even further integrations between physical and digital realities. Online brands like Amazon will start having more physical products, like  Dash Buttons, and physical brands like Walmart will start having more digital features, like store maps and product trials.

Traditional business products are being reimagined as services as organizations modernize core systems and the technology stack.

According to Gartner, within three to five years, billions of things will be represented by digital twins, a dynamic software model of a physical thing or system. Using physics data on how the components of a thing operate and respond to the environment as well as data provided by sensors in the physical world, a digital twin can be used to analyze and simulate real world conditions, responds to changes, improve operations and add value. Digital twins function as proxies for the combination of skilled individuals (e.g., technicians) and traditional monitoring devices and controls (e.g., pressure gauges). Their proliferation will require a cultural change, as those who understand the maintenance of real-world things collaborate with data scientists and IT professionals.  Digital twins of physical assets combined with digital representations of facilities and environments as well as people, businesses and processes will enable an increasingly detailed digital representation of the real world for simulation, analysis and control. 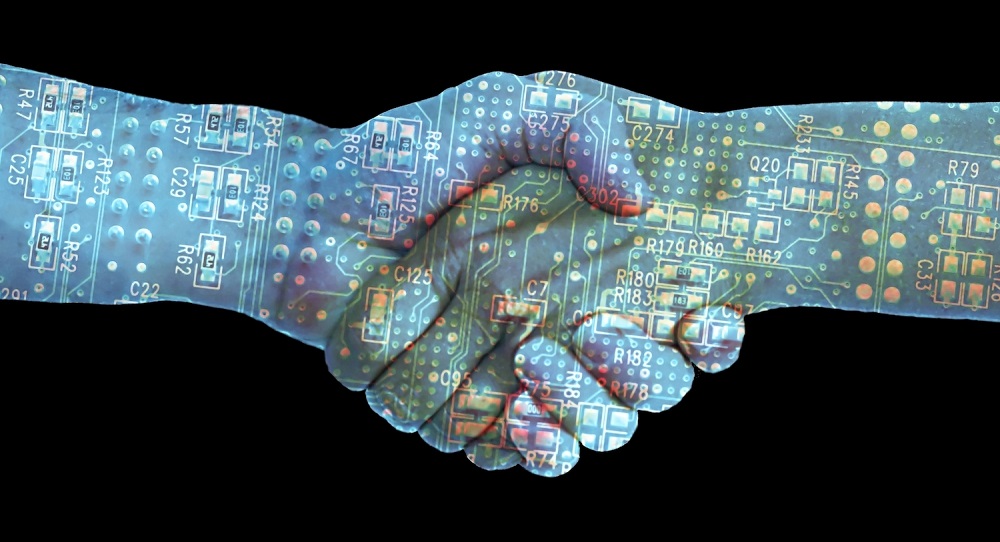 Blockchain, a way of distributing a database across many far-flung computers, is emerging as the mainstay for digital identities in the emerging trust economy.
Exponentials watch list – Advances in disruption forces like synthetic biology, energy storage, quantum computing, and nanotech could exponentially transform the way we do business. Remember the big Bitcoin phenom of 2015?  It turns out that the coins themselves could be far less valuable than the underlying technology, called blockchain, that created them.

Consortiums have sprouted up to create new blockchain apps for the  financial industry, for  health care, and so on.

Market Reports Hub believes the global blockchain technology market will grow from $210.2 million in 2016 to $2.3 billion by 2021.

Advances in disruption forces like synthetic biology, energy storage, quantum computing, and nanotech could exponentially transform the way we do business.

Big data has been a big topic for the past five years or so, when it started making headlines as a buzzword. According to Forbes, the idea is that mass quantities of gathered data—which we now have access to—can help us in everything from planning better medical treatments to  executing better marketing campaigns. But big data’s greatest strength—its quantitative, numerical foundation—is also a weakness. In 2017, I expect we’ll see advancements to humanize big data, seeking more empathetic and qualitative bits of data and projecting it in a more visualized, accessible way. 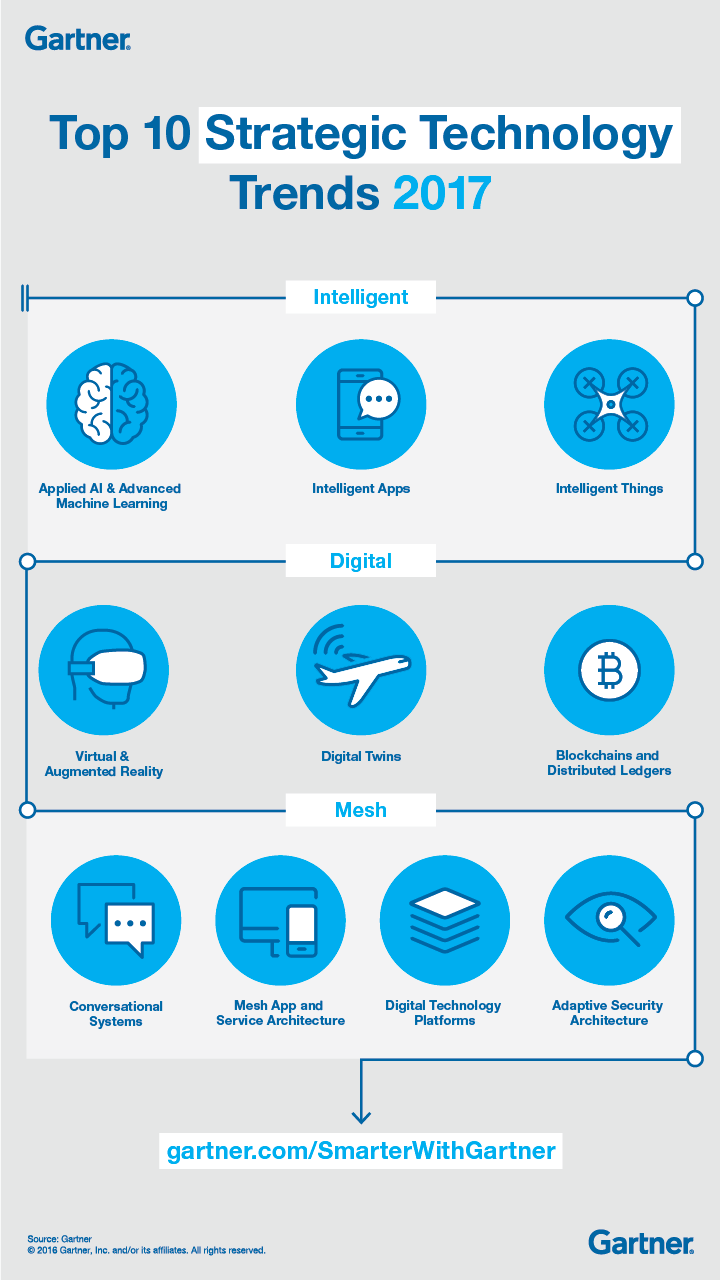 “The evolution of the intelligent digital mesh and digital technology platforms and application architectures means that security has to become fluid and adaptive. Security in the IoT environment is particularly challenging. Security teams need to work with application, solution and enterprise architects to consider security early in the design of applications or IoT solutions.  Multilayered security and use of user and entity behavior analytics will become a requirement for virtually every enterprise,” points out Gartner.