For his performance in the holocaust drama The Pianist, leading actor Adrien Brody won an Academy Award. A method actor, Adrien went to great lengths to portray his character, the Jewish Polish pianist who loses contact with his family during the Second World War and the struggles he faces to survive. To get into his character’s mindset, he lost 30 pounds in weight, sold his home and car, broke up with his girlfriend and practised the piano for four hours a day until he could master passages from compositions by Chopin.

Adrien Brody was 29 when he learned to play the piano. This goes to show that you can learn to play the piano at any age, even as an adult! It’s true that it’s too late to become a concert pianist, but if what you’re looking for is having fun playing music, there’s no better time than today.

If you’re reluctant to take up playing the piano because of the steep learning curve (you know: learning the notes, the music terms and so on), the Magic Keys app is the perfect solution.

Magic Keys is an extended reality app that helps you learn to play the piano in a new and easy way (you can learn the notes later).

The app was developed by Dominik Hackl, a passionate game developer with a strong interest in Virtual and Augmented Reality. 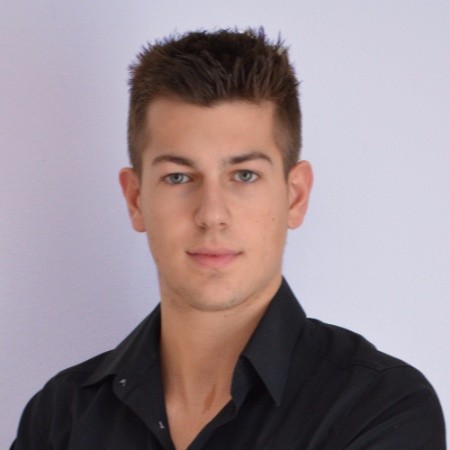 He’s also a pianist so he understands the needs of grown-ups who regret stopping piano lessons when they were kids or people who have never taken lessons but wished they had – like me.

For the people in either category, learning to play the piano is a dream come true (Check out the comments to his LinkedIn announcement).

In the interview below, Dominik answered a few questions on Magic Keys, the future of extended reality, what he would do if he were Mark Zuckerberg and the tech that makes his life easier as a creator.

BRAND MINDS. We’ve seen VR applications in many industries: healthcare, education, and entertainment among the most prominent. Why did you choose piano learning?

DOMINIK HACKL. I am a passionate pianist myself and I’ve been playing the piano since the age of 8.
So when I first got into VR/AR development I immediately thought of this idea and knew that the piano and AR would be a perfect match.

Also, I know many people who would love to learn the piano but are afraid of the steep learning curve. With the app, my goal is to make the instrument more accessible and bring more people to enjoy it.

BM. What is the future of mixed reality applications in your opinion?

DH. There are many areas which can seriously benefit from Mixed Reality applications. But in my opinion, there is currently a little too much hype around the whole metaverse concept.

We should first focus on creating solid applications that can actually be achieved with the current state of hardware rather than already fantasizing too much about transforming all aspects of our lives into some kind of metaverse.

These discussions are definitely important but I think there is too little emphasis on what’s currently possible.

BM. You are the creator of a number of games for Windows and Android. Is game development experience mandatory for developing projects in Virtual and Augmented Reality?

DH. I would not say it is mandatory but there are certainly a lot of overlaps. Both, (3D) games and VR/AR applications are interactive 3D experiences, so topics like 3D math, shaders and rendering pipelines apply pretty much in the same way for these disciplines.

And of course, nowadays both will usually be built on one of the big game engines, Unity or Unreal.

BM. I would like to become a mixed reality creator, where should I begin?

DH. As mentioned above, most VR/AR apps are built on a general-purpose game engine: Unity and Unreal Engine are the major players. So, I would definitely start by learning one of the engines.

Unity would be my number one choice because it’s slightly more general-purpose and tends to have earlier support for new hardware while Unreal is more tailor-made for games. Then a good level of programming is also required since all engines rely on scripting to create the behaviours for your app.

For the major engines (and their scripting) there are plenty of tutorials and guides online, so YouTube is probably a good place to start.

BM. Here’s a short imagination exercise: you have replaced Mark Zuckerberg at the helm of Meta, what is your first project? Remember, your budget for special projects is at least ten billion dollars, the amount of money the company has invested in developing the Metaverse.

DH. First off, I’m really glad I don’t have to replace him in his position 🙂

But if so, I would probably put as many resources as possible into hardware development and research since this is currently the greatest bottleneck (kind of what they are actually doing, I guess).

I would also try to clean their image as an untrustworthy data mining company by advocating for open standards when it comes to the metaverse and future development in Extended Reality (XR).

BM. What’s one myth about VR, AR or mixed reality that we need to stop believing in?

DH. That it will completely replace physical reality within the next decades.

I am really optimistic about the use cases for XR and I can’t think of any reason why we would want to replace the great aspects of our reality with a virtual one.

BM. What tool is making your life easy as a creator?

DH. The Quest’s Oculus Link feature is still one of the best things they have done. Plugging your Quest into your PC to effectively make it a PC VR headset works just so seamlessly and it especially is a huge time saver for developing and iterating.

BM. What book are you reading right now?

Reading it makes you appreciate even more what an incredible miracle – from a technical, creative and business perspective – it is that any of these games are being created and finished.

BM. What app do you use daily?

DH. YouTube is by far my most used app/website. I definitely use it daily for work and for entertainment.

In return, I am almost completely abstaining from other social media apps and I don’t spend much time on my smartphone in general.