Only 3% of the marketers said they planned to cut back on influencer marketing in the coming year, versus about 75% who anticipated spending even more on it, says emarketer.com. Moreover, according to the website, companies are paying the most for celebrity posts, especially on certain platforms. On average, posts by celebrities with at least 1 million followers (considered as influencers) cost nearly £65,000 each ($87,731), with Facebook posts demanding a leading rate of approximately £75,000 ($101,228).

Influencer marketing costs are going up in the UK, according to research by  Rakuten Marketing and  Morar Consulting, but prices per post vary considerably depending on reach and platform. This month, polling of UK marketers working directly on influencer programs from sectors including fashion, beauty and travel, approximately two-thirds of respondents had seen the prices influencers charge for posts go up in the past 12 months. In some industries, the costs were even higher, with some premium fashion brands, for example, paying celebrity influencers more than £160,000 ($215,954) per post.

Spending was much more modest for so-called micro-influencers—those with 10,000 or fewer followers, due to the fact that only a fifth (20%) of marketers claim they are able to demonstrate the impact of influencers through indirectly influenced sales. Prices averaged at close to £1,350 ($1,822) per post, with YouTube and Facebook commanding the highest prices—more than £1,500 ($2,025)—and Snapchat the lowest at just over £1,000 ($1,350).

“Decision makers questioned from across a variety of sectors including fashion, FMCG, beauty and travel admitted that they would shell out as much as £53,000 per  Snapchat post, which despite coming in at significantly less than the value they placed on other platforms, is notable given that Snapchat’s ephemeral nature means videos and pictures disappear within 24 hours of being posted,” said Rebecca Stewart for thedrum.com.

Affiliate marketing firm Rakuten Marketing spoke to 200 UK marketers working on  influencer programmes and found that post-for-post they were prepared to pay 12% more for Facebook endorsements than they were for YouTube. The research also found that despite the value brands clearly place on high-profile influencer slots, the majority of those asked (86%) admit they aren’t entirely sure how influencer fees are calculated. Which is pretty odd, especially after the last years of change in the media buying market, the restriction of budgets and the overall risen caution.

Why are the influencers so important for marketers when it comes to social media? According to The Economist, social media offer brands their best opportunity to reach cord-cutting millennials: Snapchat, for instance, reaches 40% of all American 18- to 34-year-olds every day. 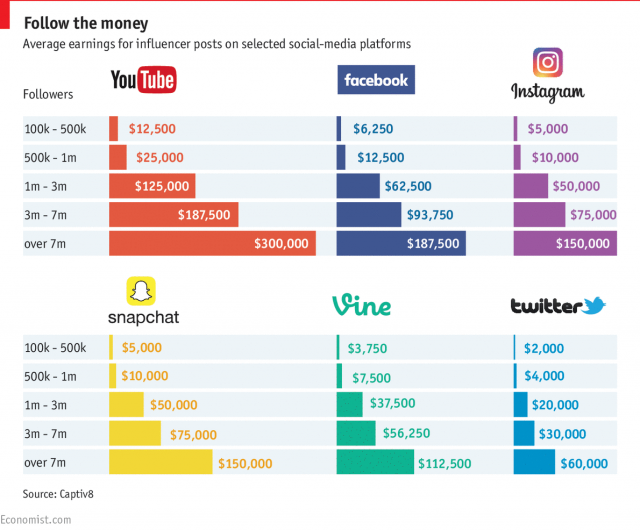 “Moreover, these platforms can make consumers feel they have gained unprecedented access to the lives of the rich and famous. That lets sponsors interact with their target audiences in ways that traditional advertising cannot match. In turn, demand from marketers for these channels has made social media lucrative territory for people with large online followings,” wrote the famous business magazine.

Less than a third (29 per cent) believe that the influencers they work with are entirely concerned whether their content drives sales for the brand. Interestingly, when asked what would encourage marketers to invest more in an influencer programme, greater transparency and better reporting of influencer contribution to sales now rank as the highest factor (50 per cent).

James Collins, Rakuten Marketing’s SVP/managing director, global attribution, comments, “Influencer marketing can be hugely effective but marketers are commissioning expensive posts without understanding the real impact on the purchase journey. It’s essential that marketers question influencer fees and use attribution tools to measure the effect of this activity in order to create strong, value-driven relationships between brands and influencers.”