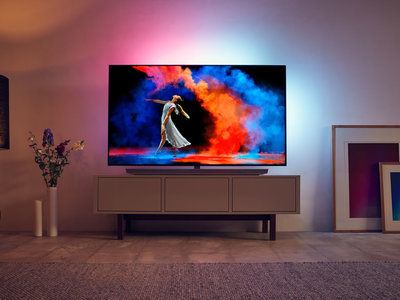 LG makes five series of OLED TVs, all of which have the exact same excellent picture quality. “We choose the LG C7 OLED as our best TV of 2017 because it offers the perfect blend of performance, design, and price. You simply can’t get a better picture from any other TV, and LG’s WebOS smart TV software makes the TV a joy to use, with support for all the best 4K HDR apps. Sure, there are fancier TVs out there, but none of them makes as much sense as LG’s C7 OLED,” wrote Digital Trends.

LG is also on top in TechRadar’s list, with LG OLED C7 – available in both 55 and 65-inch iterations. “It’s here because it delivers better brightness and light control than last year’s C6, making it a high dynamic range performer that doesn’t sacrifice OLED’s class-leading standard dynamic range capabilities. It delivers its new picture thrills at a price that finally makes OLED a financially viable alternative to top-end LCD sets making it, beyond a doubt, one of 2018’s most irresistible TVs,” said TechRadar.

TrustedReviews considers that Sony KD-65A1 could win the prize for the most unusual TV design. Moreover, “the Sony A1 isn’t just an OLED TV – Sony’s ‘Acoustic Surface’ technology does away with speakers entirely and shakes the screen to make sound. And it totally works. Crazy sound systems aside, Sony’s first commercial 4K OLED TV is a huge success, with bags of fine detail, lovely colours and class-leading motion handling. It’s a bit on the pricey side, but if you want something that can show off what TVs are all about in 2017, this will do nicely”.

At the same time, another Sony product, The Sony Bravia XBR-65A1E, received from Tom’s Guide the title of “Best Picture Quality”, something we all expect each time we hear the name Sony Bravia.  “A truly superior OLED TV with impressive sound and robust Android TV features. The 65-inch OLED panel delivers deep blacks, strikingly sharp pictures and excellent viewing angles. The 4K set also includes support for Dolby Vision and other HDR formats to deliver better brightness and more colors. Sony’s Acoustic Surface technology is a unique approach to audio, which turns the glass of the display into a speaker, and is a significant improvement in television sound,” writes the website.

According to GadgetReview the brand is on the second spot, as Samsung televisions carry an above average price compared to most of the other brands on the market, but the image quality options with this family of TVs justifies a slightly higher price point. “Samsung units commonly feature the well regarded Tizen interface, making Samsung one of the best Smart TV brand options. If you’re looking for a best 4K TV brand, Samsung again ranks well in terms of Ultra HD display quality. As far as display technology, Samsung currently is focused on LED-LCD TVs, but it has experimented in the past with OLED — even releasing a few models a few years ago — and it recently discussed quantum dot LED displays,”explained GadgetReview.

“It’s difficult to overstate quite how good the Samsung UE65KS9500 is. There are few TVs out there which can do justice to 4K HDR content like this TV can – apart, maybe, from the Panasonic which you’ll find below in the second spot – and the results have to be seen to be believed. The curved screen is partnered with slick design and good looks, and although the KS9500 is a tad chunkier than rival sets around the rear, that’s for good reason. The extra girth hides an FALD (full array local dimming) backlight which allows the Samsung to provide super-bright HDR highlights across its 65in panel while delivering astonishing contrast and deep, lustrous blacks. Gaming responsiveness is best in class, too, which is a bonus,” also considers expertreviews.co.uk.

Panasonic has long offered some of the best TVs in the market, dating back to the days of CRT models. And the manufacturer offers a nice collection of large screen televisions today, especially excelling as the most energy efficient TV brand. According to Gadget Review, that offers Panasonic the number 5 position in its top, Panasonic LED-LCD televisions are extremely easy to set up and use. Moreover, “Panasonic has done a nice job capitalizing on its strengths from the past to create sets with good 4K image quality”.

“Philips has a bit of a trick up its sleeve thanks to its Ambilight technology, which projects colors onto the wall behind it that mirror those shown on the TV itself. The result is that the company’s flagship OLED series, the 9002, is a really stunning piece of tech, and its P5 picture processing engine is great at getting the most out of its OLED panel. You’ll be paying a slight price premium over LG’s more budget sets, but Ambilight could be exactly what you need to justify that premium,” considers TechRadar.