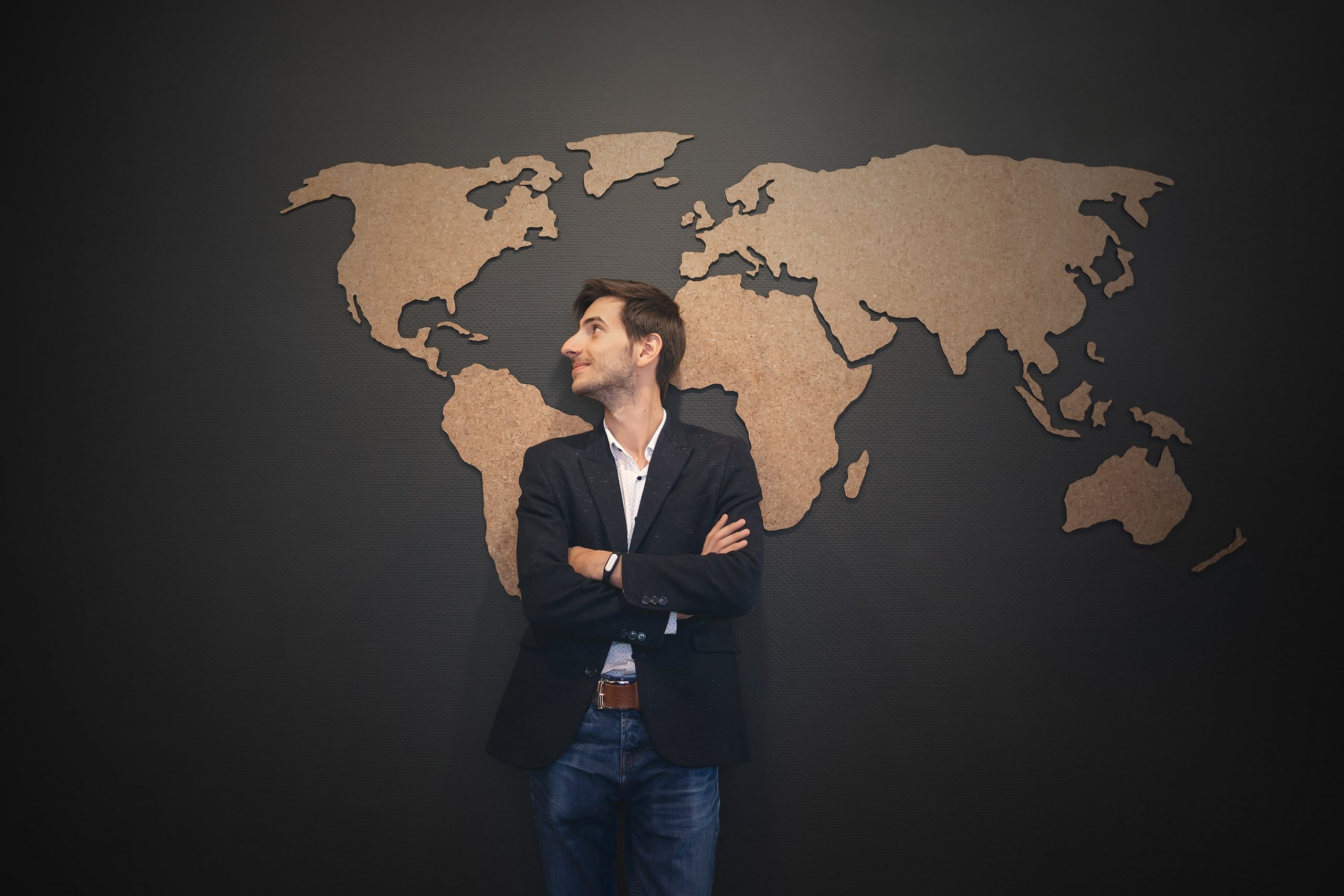 What is Hofstede’s cultural dimensions theory? UK vs China, a comparison

It is a useful business tool which provides insights for organizations looking to extend their business internationally.

With this framework, any organization planning to enter a market in a new country becomes aware of the cultural differences of that particular country.

What are the 6 dimensions of Hofstede’s theory?

Power Distance is the extent to which the less powerful members of organizations and institutions (like the family) accept and expect that power is distributed unequally. 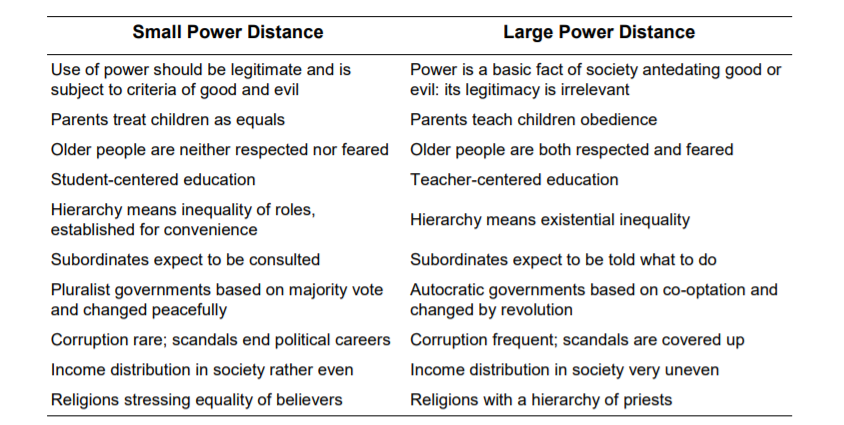 Individualism is the extent to which people feel independent, as opposed to being interdependent as members of larger communities.

Individualism means that individual choices and decisions are expected.

Collectivism means that everyone knows their place in life and society, which is determined socially.

Uncertainty avoidance deals with a society’s tolerance for uncertainty and ambiguity.

This dimension doesn’t refer to risk avoidance. It refers to the anxiety and distrust that people have in the face of the unknown and the absence of truth.

A high ranking of uncertainty avoidance illustrates people’s wish to have fixed habits and rituals and to know the truth. 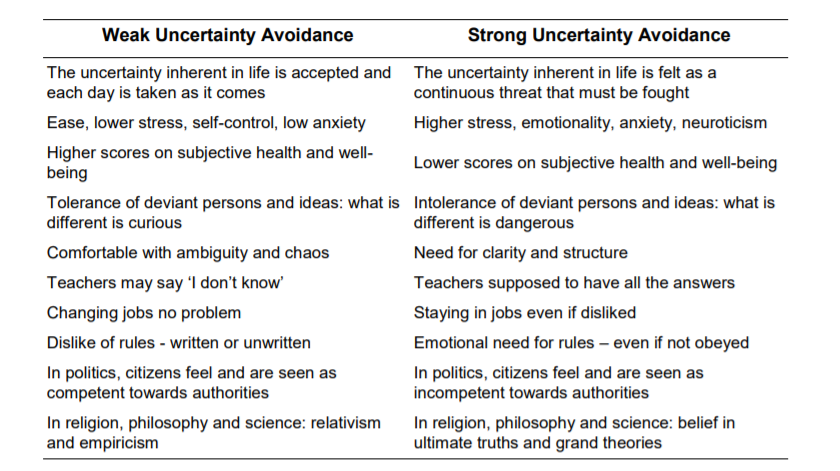 Masculinity is the extent to which the use of force is endorsed socially.

In a masculine society, men are expected to display specific behaviour traits like being and acting tough. Competition is at the heart of every activity and winning is important for both genders. There is a disconnect between men and women on an emotional level. In a feminine society, both genders are emotionally closer.

Competing is not so openly endorsed, and there is sympathy for the underdog. 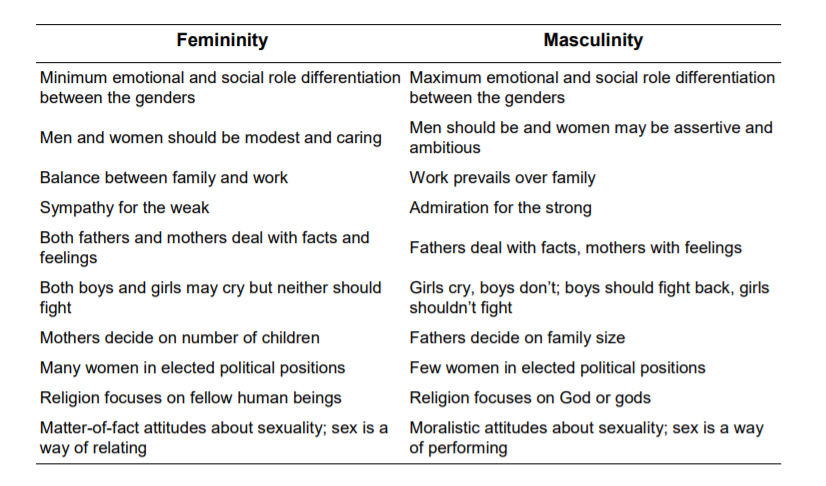 Cultures that believe the world keeps spinning, welcome change and look calmly towards the future. They know that preparing for the future is always needed. These cultures are long-term oriented and focus on technical and educational achievements.

Conversely, cultures that are short-term oriented place great emphasis on the past. They believe the world hasn’t changed much from the moment it was created. The past provides short-term oriented cultures with a blueprint for moral and social behaviour. It also influences their achievements. 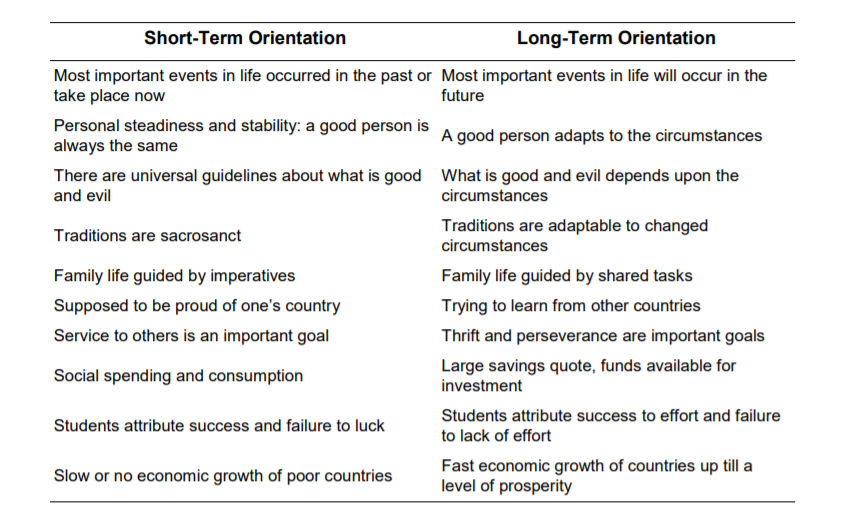 The sixth cultural dimension is about freedom and being able and allowed to have good things in life.

Indulgent cultures allow their people to fulfil their human basic pleasures and desires. People are free to enjoy their lives and have fun. They feel that they are in control of their lives.

Restraint cultures have strict social norms and regulations that suppress the fulfilment of needs and desires. People in restrained cultures feel less happy. They also feel that they cannot control what happens to them. 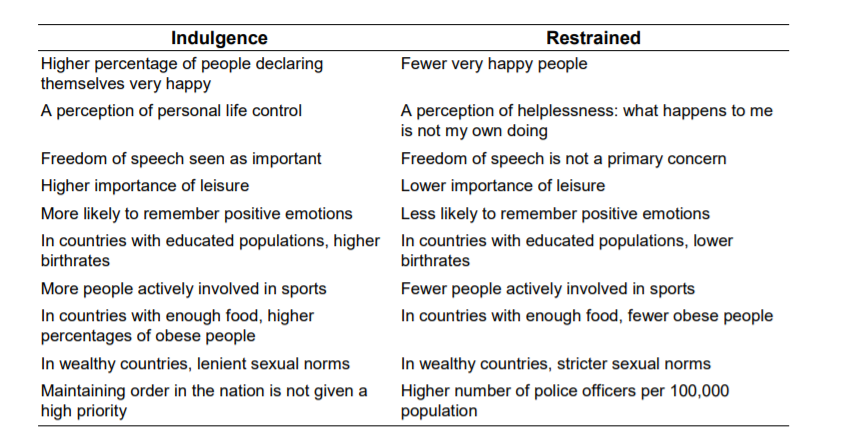 As a management trainer and manager of personnel research at IBM, Geert conducted over 100,000 employee opinion surveys in the subsidiaries of the company around the world.

At the time, his initiative produced one of the largest cross-national databases in existence.

The surveys revealed significant differences between cultures in other organizations, but the same answers by country.

Looking to organize the information in such a way that it produces valuable insights, he came up with four categories that he called cultural dimensions: power distance, individualism-collectivism, uncertainty avoidance, and masculinity-femininity.

He published his findings in his 1980 book Culture’s consequences: international differences in work-related values. In the following years, he added the fifth and sixth dimensions: long-term orientation and indulgence versus self-restraint. 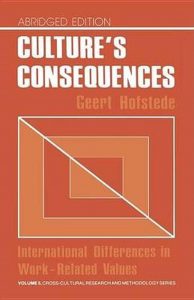 Geert Hofstede is the pioneer of cross-cultural research.

His theory is one of the earliest and most popular frameworks for measuring cultural dimensions from a global perspective. In recognition of his work, Geert received many honorary awards and distinctions.

In 2011, he was made a Knight by order of Her Majesty Beatrix, Queen of the Netherlands.

What is Hofstede’s definition of culture?

Geert Hofstede’s definition of culture is Culture is the collective programming of the mind that distinguishes the members of one group or category of people from others.

Cultures range from micro (a family’s culture) to macro (a nation’s culture).

What does a group of people believe about the nature of man or the future? What are the relationships between the members of the group? To which extent do people need rules and regulations?

Why is Hofstede’s theory important for your business?

This particular business tool is useful when planning to expand your business globally. If you wish to enter a new market in another country, analyze it first by applying Hofstede’s theory of cultural dimensions.

Is it a culture that respects the elderly? Use this piece of information when choosing the face of your marketing and PR communication or when choosing the influencers your company works with to raise brand awareness.

If the market you are trying to enter has a culture which equals being different from being dangerous then maybe it would be smart for your business to first educate the market about your brand or work on preventing your brand to be perceived negatively.

Hofstede’s cultural dimensions theory provides business executives with valuable insights that they can use to make informed decisions.

UK vs China, a comparison

UK 89% – a culture of people that are taught to think by themselves
China 20% – a highly collectivist culture where people act in the interests of the group and not necessarily of themselves.

UK 51% – a society that equally values its own past while dealing with the challenges of the present and future
China 87% – a culture with a pragmatic orientation, that has the ability to easily adapt traditions to changed conditions

UK 69% – a culture that exhibits a willingness to realize their impulses and desires with regard to enjoying life and having fun.
China 24% – a restrained culture that doesn’t put much emphasis on leisure time and fulfilment of their desires. 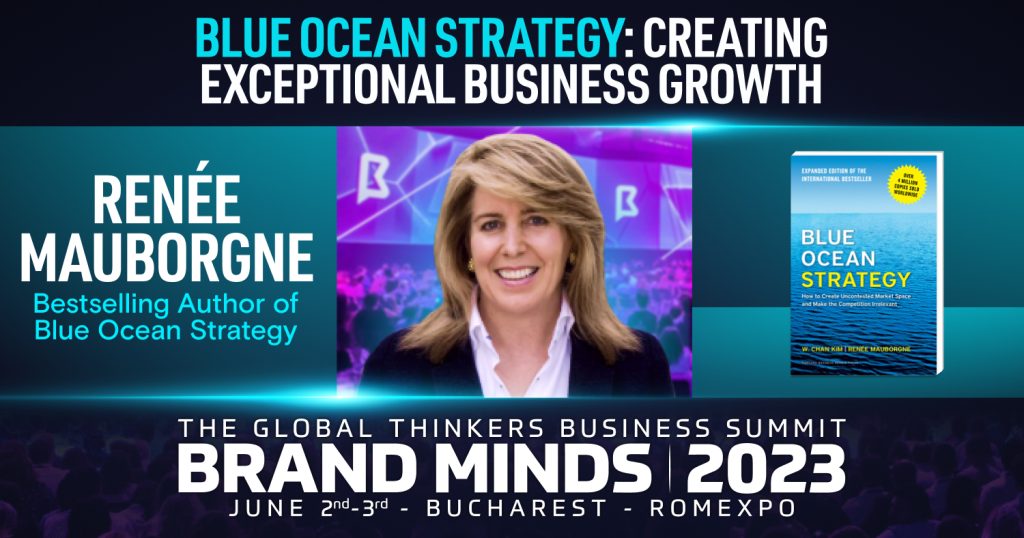