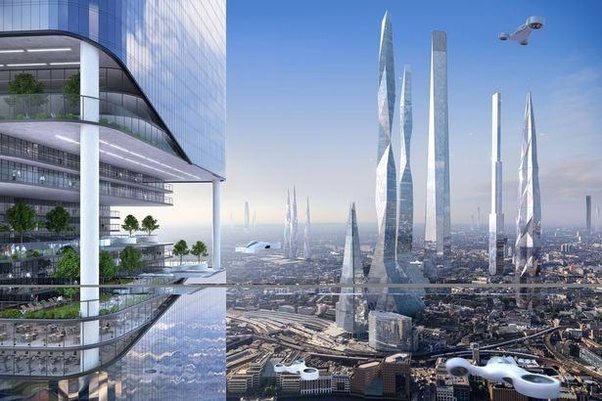 How will the city of the future look like?

Big data, Internet of Things (IoT), artificial intelligence (AI), robots, drones, autonomous green vehicles, 3D / 4D printing, renewable energy, virtual reality (VR),leap motion, eye controlled technology are just part of the present and new technologies that are here or will be here in the near future to influence our lives.

The cities are evolving as well, by becoming Smart Cities. From Singapore to Amsterdam and Barcelona, from Dubai to Stockholm,from New York to Manchester and even Alba Iulia in Romania, information and communication technology is used to enhance quality, performance and interactivity of urban services, to reduce costs and resource consumption and to increase contact between citizens and government. Smart city applications are developed to manage urban flows and allow for real-time responses.

The smart city concept integrates information and communication technology and various physical devices connected to the network (IoT) to optimize the efficiency of city operations and services and connect to citizens. Smart city technology allows city officials to interact directly with both community and city infrastructure and to monitor what is happening in the city and how the city is evolving.

According to the IESE Cities in Motion Index 2017, quoted by Forbes, which analyses all aspects that make up sustainability and quality of life in 180 key world cities, New York is again the smartest city in the world, followed by London and Paris.

To compile the index, the authors analyze 79 indicators across 10 different dimensions of urban life: the economy, technology, human capital, social cohesion, international outreach, the environment, mobility and transportation, urban planning, public administration and governance. The results show that almost all of the dimension measured in the ranking are led by European and North American cities. The exception is technology, where Taipei rules.

Moreover, according to CityMetric, Singapore is also a leading example of a smart city, and is constantly evolving its “city brain,” a backbone of technologies used to help control pollution, monitor traffic, allocate parking, communicate with citizens, and even issue traffic fines. “The behavioral aspect is not to be overlooked. Singapore’s “brain” is attempting to modify human behavior – for example, one system rewards drivers for using recommended mapped routes, and punishes those who do not. Ultimately, Singapore’s planners hope to discourage driving, and guide most commuters to making greater use of public transportation. The city is planning for 100m “smart objects” including smart traffic lights, lamp posts, sensors, and cameras on its roadways, which will be used to monitor and enforce laws,” wrote Fast Future for CityMetric.

But how will those smart cities look in the future and what can we expect from them and the specialists living and creating in them? “The number of smart cities around the world is expected to grow exponentially over the next few years and by 2050, 70 per cent of the world’s population will be living in smart cities,” believes Nick Ismail in his piece for information-age.com.

Moreover, it appears that 2030 will bring the introduction of Connected street lights, which will stream data between millions of devices and improve city services such as light, traffic, air quality, public safety and parking. Lighting technology will be at the heart of urban life in 2030 as well, helping deliver more sustainable and better-connected smart cities. “And if that wasn’t enough, by 2050 take-aways will be delivered by drones, replacing motorbikes and cars. One pizza manufacturer has already tested drone delivery and some predict these automated flying machines will fill the skies replacing the couriers of today,” adds Ismail.